George Stephanopoulos was talking about James Bakers strategy for Iraq, and whether or not it would be something in between ‘cut and run’ and ‘stay the course’. Here is our Residents response…and the proof that he just lied to America.

All the noise over Mark Foleys instant messaging has brought about the classic “hide the issue” mentality to the forefront once again. Without repeating what I’m sure most of the world knows about this, I can’t help but notice that some issues of the incident are being downplayed.

Let’s start with the GOP, the stalwart defenders of Americas morals. Foley was a Republican (regardless what FOX or AP would have you think), and was strongly supportive of all the antigay messages of the GOP. At least in public. Now we find out he’s gay, and most of his collegues knew he was gay. He also had a inclination towards teenage boys, and again, most of his collegues knew this as well. I’m not going to spend my time linking to these claims, anyone can find them in a matter of minutes. Now, these very same collegues, these voices of morality, these defenders of the christian faith, knew about Foley and did nothing.

That in and of it itself is shameless. But, the point I’m trying to make is two-fold. One, the antigay party of America seems to be full of gay men, hiding in plain sight, and destroying the freedom of the very same lifestyle they’re hiding. Two, all this blame shifting is doing nothing but making even more Republicans look bad. They all need to go. And those on the right that are doing the mad scramble for damage control by trying to place doubt as the to age of the victims, it doesn’t matter. If a page was 16, 17 or 18…hell even 19. It doesn’t matter. Mark Foley was a Congressman for the United States of America. That is enough to make this wrong. Terribly wrong. By trying to justify these instant messages and planting the seeds of doubt in the publics minds, these rightous defenders of Foley detract from the mental and emotional abuse some of these pages received. And it also minimizes the crime itself.

So, the Gay Old Party, likes the “do as I say, not as I do” meme, and when they get caught at it, blame the victim/democrats/media. But for gods sake, don’t admit it. 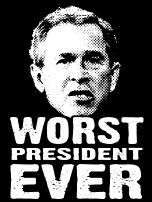 Incongruity at its finest. Referring to the Mark Foley scandel, our Resident said this,