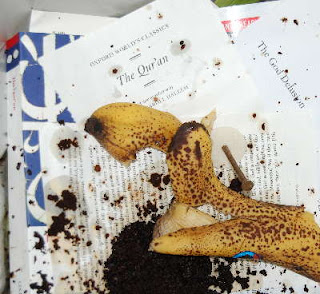 Found this jewel in one of my bookmarked sites. While I’m aware of, and enjoy, the humor and satire in this piece, it is also a very real commentary on the todays youth.

From Kingdom of Heathen

Hi! Guess where I’m writing from! Yeah! Saudi Arabia! Man, what a crazy two weeks this has been! It seems like just a few nights ago when you were disowning me for converting!

But seriously, Mom, this has been awesome! Now that I’ve gone on the Hajj, I’ve successfully completed one of the Five Pillars of Islam. I even got a bumper sticker! Also deep spiritual fulfillment derived from connectedness to God, but I can’t put that on my car.

Ha! Ha! Anyways, you know, Muhammed was the first person to do a Hajj. We call him “The Big M” around here. Yeah, so, ever since he came back to Mecca and conquered it for Islam, Muslims have been making the pilgrimage here. Millions of people, Mom! You know how Dad always told me to become part of something? It’s not the Army, Dad (wherever you are), but it’s still responsible for lots and lots of wars and dead people!

You know, Mom, Muhammed was kinda like me. He was banished from his home (Mecca!) for practicing “paganism.” Sound familiar? Haha! And so when he had enough followers, he went back to Mecca and took it away from the actual pagans! It’s awesome!

Mom, you know how you always thought I converted because I was too stupid to understand Catholicism? Well, some of my new friends find that very offensive! This one guy, Abu-Musab, says that Catholicism is the stupid religion! How about that, Mom? Hmm?

No, Ma, I converted because the Bible’s boring. There’s too much begetting and not enough killing of infidels. I’m a child of the twenty-first century, Mom. I need action, and I found it in the Koran. Sure, Jesus said he would “slay” his enemies once or twice, but the Koran has that everywhere! Pages and pages condemning the infidels! “Fighting is obligatory,” Mom! It’s just like in those video games you caught me playing!

You and Dad always told me my life needed structure, but the Church never gave me any! But with Islam, Mom (Ha ha! It rhymes!), I’ve got salat. No, Mom, not a tasty vegetarian dish. It’s prayer! I have to pray five times a day! Oh yes, Ma, five times: Before sunrise, at noon, before sunset, after sunset, and at dusk! That’s far more structure than you and your crazy confessions and nightly prayers! Ha!

So that’s why I went on the Hajj, Ma. I’ve proven that I’m an actual Muslim now. I have structure, and friends, and I’m closer to Allah. Who’s the loser now, Principal Jenkins? That’s right!

Anyways, did I mention how hot the Middle East is? It’s sweltering, Ma! It’s even worse than Dad’s laboratory! Well, there aren’t as many pointy things, so I guess it evens out. But when I got here, I was almost dying (also like Daddy’s lab!) to change into my ihram! You know what that is, Mom? It’s a white uniform! It’s like two sheets, but even better, because its traditional! And sandals! Everybody else has to wear them, too, so there aren’t any stylish kids to beat me up anymore! Ha ha ha! We’re all nerds before God!

And you know what else is cool about Mecca? The Kaaba! It’s this big cube-shaped building that Abraham built, in the center of the city’s mosque. It’s got a big black cloth on it, and my friends say that on the inside there’s a room with Koranic inscriptions! They don’t let people in, thought, except for the annual cleaning ceremony.

You know, when The Big M conquered Mecca, he didn’t hurt anybody, because he was just cool like that. Instead, he just told people to get rid the filthy pagan idols around the Kaaba. So now, instead of worshipping idols, everybody bows down to a gigantic cube! It’s awesome!

And not only is the Kaaba awesome, but the whole Hajj is awesome! When I got here, I had to walk around the Kaaba seven times, and then walk up and down a corridor seven times! It’s because a long time ago, this servant woman Hagar had to walk back and forth across the desert to get water for her son. Pretty cool, right? And then, after all the walking, I had to drink water from the Zamzam well! Zamzam! Isn’t that a funny name? Ha ha! Now I understand how horrible life was for adulterous maids!

So then, after all that walking, I had to walk even more to this place called Tent City. You know what that is? It’s this big city of tents! Ha ha! It’s in the Mina Valley, which is pretty big. We had to walk here without food of water, kinda like whenever you and Dad took me to Grandma’s. Tent City’s only about six miles from Mecca, though. And we prayed when we got there, instead of going down to Grandma’s basement.

The most eventful part of my Hajj came on the tenth day, when we all went back to the Mina Valley. This was the part when we all threw stones at these three pillars called the jamarat, because they represented Satan. I don’t know if he had real estate in them or whatever, but people seemed pretty mad at those big hunks of stone. There’s also this bridge around them, called the Jamarat Bridge, where people can stand and throw the rocks. Awesome, huh?

So I was on the ground, throwing lots of pebbles and having a good time, when suddenly there’s this stampede up on the bridge! I see people pushing people and running everywhere, and people falling off and all sorts of painful things! Apparently, a couple dozen people were killed! But one of my new friends told me that happens all the time (in 1994, almost three hundred people died!), so I wasn’t too worried about it. After all, they’d be going to Heaven anyways! It’s just too bad they didn’t get to wage war on any infidels first.

Oh, and also, we had a feast that night! And for the next two days! There was food everywhere! It was awesome!

Say, Mom, if you ever become a Muslim, I’d be happy to go on a Hajj with you. Because, you know, women can’t go by themselves. It’s a Saudi law! Isn’t that silly? Ha ha ha!

Yep, I started out alone, but then I met all sorts of interesting people. I made lots of friends, Mom! Aren’t you proud? Ha ha! Although, I won’t be seeing some of them for a while. Jacob lives all the way in Australia, Andy lives in London, and Abu Musab said he couldn’t tell me where he lived. Isn’t that awesome?